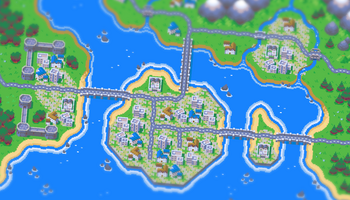 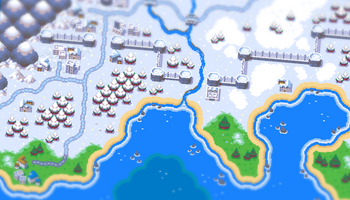 I've had a few questions and requests involving new biomes and tiles for the tileset and I wanted to address these, detail my plans for future updates and share some WIP images of new tiles.

First up, I'm working on a modern variation of the tileset that replaces the buildings, roads, stone walls and stockades, bridges and cobblestone tiles with modern equivalents. You can see the how these are going to look in the two images attached to this post. I'm also going to produce layered versions of the tileset with buildings, roads, trees etc. against transparent backgrounds to allow greater flexibility for users whose game engines and editors support layering. This should also hopefully make user edits to the tileset and adding new biomes easier as well. Finally for this first update I'm going to make some small changes to the existing tileset for efficiency and ease of use, as well as tweaking a few tiles that looking back after release I'm not 100% happy with and adding in a few things I missed out (crossroads!).

The biggest request has been for more biomes and I'm going to turn my attention to these after the first update is live. The most requested is swamp / marshland, so this will be the second major update, with jungle and wastelands / rocky highlands biomes planned after this.

I'm planning to get the modern tiles update live in the next couple of weeks and I'll post a WIP preview from the biomes at some point soon too.